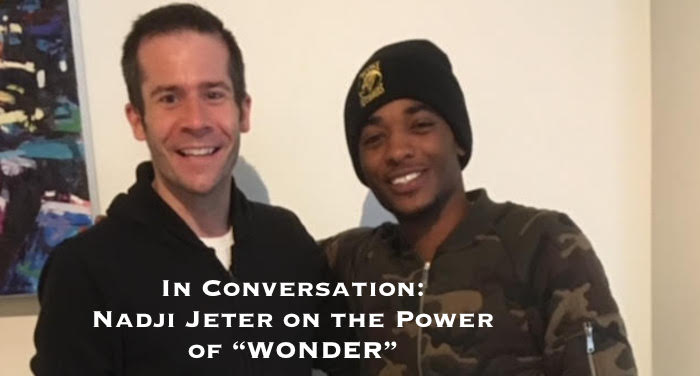 Nadji Jeter is a young star on the rise who is probably best known for voicing Miles Morales in the animated Spider-Man series for Disney XD as well as the Grown Ups movies alongside Adam Sandler and Kevin James. Now he gets to call Julia Roberts and Owen Wilson co-stars in the new family film Wonder. It was quite apparent how proud he is of this movie and why he think every kid and their parents should see it.

Paul McGuire Grimes (PMG): Tell us a little bit about Wonder and your character, Justin

Nadji Jeter (NJ): Wonder is an amazing and impactful film. It’s going to change some lives. I think it’s going to change some perspectives, little kids as well too, about being bullied. My character Justin is Via’s boyfriend in the film. He fills a little void of what Via is going through. She knows her brother is going through a lot too, so she feels a little isolated and alone. Justin is that guy, the fun lovable guy that everyone likes in the film. I think this movie is going to do wonders.

PMG: I like that this film presents Via’s story as well as Auggie’s. It can be easy to push her character aside, but to give her character a voice as well was great. Were you familiar with the book before getting cast?

NJ: Honestly, no. I don’t think it had been in every school yet when they casting it. I think the book was just reaching a peak of being known. I think I had nieces and nephews reading it at the time they were doing the casting. The casting lady told me the whole background. I was so attached to this story when I heard it was based on true events. We met some kids like Auggie. We met a few kids with 50+ surgeries at seven years old. They brought those kids on set, and we went to some hospitals too.

PMG: You get to share some scenes with Julia Roberts and Owen Wilson. Did they give you any acting advice or tips about the business?

NJ: I just sat back and watched. That’s how I take from people– just watching how people conduct themselves. I learned a lot. Owen and Julia are just the coolest. They’re so down to Earth. To work with them was just an honor.

PMG: The movie offers great lessons for kids and their parents. What do you hope the Auggies or Vias of the world take from the movie?

PMG: In the movie, you get to play the Stage Manager in a high school production of Our Town.

PMG: Oh yes! I’ve done that show before. Do you have an interest in doing theater as well as film? Do you want to go back and forth at all?

NJ: I actually did theater when I was eight-years-old. I was in a play in Atlanta, Georgia called “Wacko Kiddo”. Eventually, I will look into theater. Right now, I just want to keep doing movies. I want to do an action film next. I did one before.

PMG: You want to keep going in that genre.

NJ: Yeah, in that direction.

PMG: Some sort of Fast and the Furious, ensemble type?

PMG: You’re in Minneapolis for WE Day. Tell us all about it.

NJ: WE Day was amazing. It was this huge event. It was at Xcel Energy Center. We sold it out. We had like 18,000 kids. That blew my mind. It blew me away. All the kids were so energetic and to see all their smiles. It was amazing.

PMG: Did you talk about Wonder and show some scenes from the film?

NJ: The kids knew all about Wonder. They were screaming. We had high school students and elementary students. I think everyone in the stadium had read the book. It was something else. It really warmed my heart.

PMG: What’s next for you?

NJ: Yes, it comes on every Saturday on Disney XD, The Ultimate Spider-Man. I play Miles Morales. I also have a video game coming out under Insomniac Games. I can’t say that character yet, but it’s coming soon for PlayStation and Xbox.

PMG: How different do you approach voice over work in animation versus a film?

NJ: Totally different. The first one I did was The Last of Us with Naughty Dog. It was whole new world as we were putting on motion capture suits with the dots on the face. We did mo-cap for the video game. Voice over is a bit of a change. It is different. They’re always telling me to “Stay on mic! Stay on mic!” I tend to get too far away from the mic. For voiceover, you’re in a booth with your castmates still and you’re all going back and forth with your lines. It’s an environment change. For mo-cap for all the video games, that’s a whole other world to get in hang of. Putting on the suit and then getting used to the suit and then moving around in it. It’s crazy.

PMG: It’s so different than Mario back in my day.

NJ: Now, they have a stage with 98 cameras, so now you have 98 cameras around you in a big old warehouse with just you one actor in mo-cap suits acting out scenes.

PMG: Next you can do an Andy Serkis project.

Wonder is now open in theaters in wide release. Take your family and go see it!