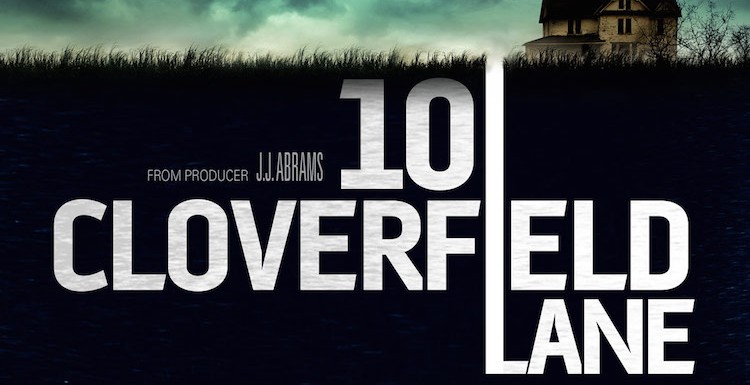 10 Cloverfield Lane is considered by the studio to be the “blood relative” sequel of the smash 2008 film Cloverfield. Producer J.J. Abrams snuck a fast one on moviegoers by producing a sequel and keeping it shrouded in secrecy. The trailer was released just a short time before the film’s release and fans went into a tizzy trying to decode everything in it. There wasn’t a lot of buildup in the marketing. There was only one trailer as opposed to the multiple trailers and TV spots we typical get that in turn give away most of the movie. Instead, 10 Cloverfield Lane is best experienced with as little knowledge of it as possible. I do realize some people will stop reading this review for fear of any giveaways that may come out. I’ve tried to keep it as spoiler free as possible, but sometimes people like to know what to expect in a scary movie. If you want the ultimate shock upon viewing, come back and read my thoughts afterwards.

Michelle (Winstead) is seen packing her belongings in a fury and heading out of her apartment in a rage. The camera cuts to her engagement ring purposefully left behind. As she’s driving away and getting that call from her fiancé (surprise, it’s Bradley Cooper!), her car is struck and rolls over. When she comes to, she finds herself connected to an IV and chained to a cinderblock wall. At first I thought we were dipping into Saw territory but there isn’t “torture porn” in this movie. She’s being held captive in an underground fallout shelter. Her captor, Howard (Goodman), claims that he saved her life and is keeping her safe from the outside world, which is under attack. She’s not the only one down there. John Gallagher Jr. (The Newsroom) pops up as Emmett, the third occupant of the bunker. His unkempt appearance suggests he’s been down there for some time. To say anything more would be to completely spoil the gauntlet that is set in place.

The number one question you may be asking yourself is if you need to see Cloverfield first to enjoy this one. The answer is no, but you’ll have a better appreciation for the ending of this film if you know the concept of the first. 10 Cloverfield Lane boasts completely different characters and storyline while sticking to the same universe. This one also ditches the found footage technique found in the first. While it was once fresh and exciting, it would never have worked with this film due to the logistics of the story and for the fact that the horror genre has over used the technique to absolute death. I never want to see a found footage horror movie again.

New to this film is the creative team of director Dan Trachtenberg and beginning screenwriters Josh Campbell and Matthew Stuecken with Whiplash genius Damien Chazelle helping them out. They play on fear, paranoia, and claustrophobia as a majority of the film takes place in the bunker. As you know by the trailer there is a door to the outside world and only rarely do they show a glimpse of what is beyond that door. If you’re beginning to think this is going to be just a one-noted film about a girl chained up in a bunker, you’re wrong. There are some interesting levels that come into play in how the suspense is carried out. You’ll just have to trust me as I don’t want to dip into it further. I never knew what was going to happen next. Even when I tried to plot it out, the writers take some surprising and shocking turns to make me question just what I presumed to be true in the movie.

It’s up to the small cast of John Goodman, Mary Elizabeth Winstead, and John Gallagher Jr. to make this fairly small horror film work. Winstead (Scott Pilgrim vs. the World) is no bimbo blonde running from the bad guy. She’s one tough cookie that has the brains and brawn to outwit and outlast John Goodman’s character. The movie is 115 minutes and plays like a game for Winstead to stay ahead of Goodman’s character. Goodman is fantastic at playing that creepy neighbor while keeping him grounded in reality. He shifts back and forth on whether or not you believe him or think he’s psychotic. It’s the kind of performance we rarely get to see from him as he tends to play the supporting character actor in more Oscar-caliber films or he’s lending his lovable voice to the Monsters Inc. movies. As Emmett, John Gallagher Jr. is another puzzle piece to this mystery. Another character who is untrustworthy. I never knew if I should take him at face value or if he knew more than what he was leading on.

The element of surprise and utter shock keeps the movie alive. This idea was part of the whole concept from the filmmaking to the marketing to the actual movie itself. Even the actors were left in the dark about its connection to Cloverfield. Like any good scary movie, the score keeps that tension and suspense high throughout the entire film. Composer Bear McCreary’s music feels a bit reminiscent of James Newton Howard’s scores and the ultimate maestro for this style, Bernard Herrmann. It keeps it moving at a brisk pace leading up to a climax that is completely frightening. This isn’t a movie that is trying to break any grounds in the horror genre or try something new. I appreciate its old fashioned feel despite it being a “sequel”. I prefer my scary movies to be psychologically scary, and Dan Trachtenberg keeps it as natural and believable as possible. There’s something really scary when you think about being trapped underground with a madman and no connection to what may be outside those walls.

Is It Worth Your Trip to the Movies? A well-made, suspenseful flick full of jumps for anyone needing a good scare.