Movie Review: DAWN OF THE PLANET OF THE APES

2011’s Rise of the Planet of the Apes ended with the apes attacking the Golden Gate Bridge. The movie as a whole was rather dull and full of bad acting, but it culminated to a rather intriguing ending that left me wanting more. I was optimistic that this series still had some life left to it. Ten years have passed since those events and the Simian flu has wiped out a majority of the human population. There is a small group of humans that are immune and sequestered in a small colony in San Francisco. The exact opposite has happened to the ape population. They have grown, evolved, and populated. Caesar (Serkis) is seen as the authority figure amongst all of the apes. They believe the humans have been destroyed as there has been no trace of them since the outbreak of the virus. While walking through the forest, Caeser’s son Blue Eyes (Thurston) encounters a small group of them who have entered the ape territory.

It’s not long before Malcolm (Clarke), Ellie (Russell), and the others are surrounded by a legion of apes. Malcolm learns right then and there that the apes are far more advanced than they had expected. Caesar demands that they leave and never return. Back on the colony, Malcolm informs their leader (Oldman) that the apes can talk. The humans are in a bind as they are running low on energy and there is a dam in the ape territory that could be resourceful. Malcolm decides to face Caesar again and claims he only wants peace between the humans and apes. They come to an agreement, and Caesar allows Malcolm and his small crew to use the dam. Some of the apes including Koba (Kebbell) are not so pleased with Caesar’s decision to trust the humans. He proceeds to betray Caesar and disrupts the peace that has been building between both sides.

In a way, Dawn of the Planet of the Apes is like X-Men: Days of Future Past or The Amazing Spider-Man 2. You could consider it a sequel to a reboot or just look at it as the latest in a longer series of movies. It definitely feels like the second part of what will end up being a new trilogy as Rise of the Planet of the Apes set the groundwork for this storyline. With the time frame jumping ahead ten years, we get a whole new set of human characters played by Jason Clarke, (Zero Dark Thirty), Keri Russell (Felicity), Gary Oldman (The Dark Knight trilogy), and Kodi Smit-McPhee (Let Me In). With these new characters, I would have liked a bit more in terms of character development in the script. There is a bit of background given in random lines just to add a bit of context, but it is sparse. Am I asking for too much here? I suppose so as the story really belongs to evolution of the ape characters. The team of screenwriters including Mark Bomback, Rick Jaffa, and Amanda Silver continue to push the line of how advanced the apes are and how they are continually becoming closer and closer as a species to humans. I was intrigued by the choice to have the language of the apes be a basic form of sign language with broken English added into it as they continue to learn how to communicate.

The use of motion capture technology brought a whole new vision to the series as we no longer had actors in ape costumes. The actors wear full body suits with censors and cameras to capture the actor’s complete performance including their movements and emotions. In post-production, Weta Digital uses those images and replaces the CGI ape design over it. It’s a technology that continues to evolve and is proof that you can have a CGI driven film but still capture the acting and emotional arch involved. The technology has come so far that the actors can shoot their scenes on location with the other human actors involved instead of being stuck in a studio or sound stage. Every ape character seen in the film has a human performance behind it. While it may be easy to think of Jason Clarke, Keri Russell, or Gary Oldman being the faces of the movie, the true life and breath of the movie belongs to Andy Serkis and Toby Kebbell (Wrath of the Titans) as Caesar and Koba, respectively. Serkis was the perfect actor to bring Caesar to life. I’ve said it before and I’ll say it again, he is a master craftsman. He has been a leader in this work ever since using it as Gollum in The Lord of the Rings trilogy. He should have been given some sort of award for his work in that series, and he continues to prove he’s more than just that character. These reboots wouldn’t be the same without him. There is a cartoonish feel to the other movies, but he brings a depth and emotional connection to Caesar like he would for any other human character he would play. I have never seen Toby Kebbell in anything else, and I was mesmerized by the menacing qualities of Koba and how truly evil he becomes toward the other apes.

Director Matt Reeves (Cloverfield, Let Me In) keeps the pace and action up throughout the whole movie. I thought the first one was a bit slow, but that is not the case this time around. The central conflict between man versus ape and ape versus ape is set in place fairly early on and the tension continues to escalate until the final battle. That battle is epic and quite frightening at times. The camera is kept pretty panned out throughout a majority of the action scenes which gives a clear scope and magnitude of the bigger picture at hand. I get so sick and tired of action films that are shot so up close and fast that you can’t see what’s going on. I think it proves far more stunning and visually cinematic seeing the hordes of apes ascending into the colony and fighting with a wide shot. Michael Giacchino’s score is present and drives the intensity even further. There is a vintage feel to it which is an interesting juxtaposition to the futuristic world of the movie. 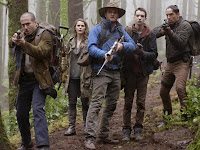 When a film series continue on and on you sometimes get a bunch of movies that are rehashes of the same crap we’ve seen before (ahem Transformers: Age of Extinction). They are made with the pure intent of making money over quality. I think there was a lot riding on this movie to keep the series going by pushing the boundaries in a thought provoking way. Dawn of the Planet of the Apes is a pleasant surprise by doing just that and rises to the pile of being one of the better movies of the summer. The closing shot of the movie is the perfect bookend for how the movie opens. It makes me even more excited to see what direction they take the next film.

Is It Worth Your Trip to the Movies? Who would have expected that the eighth movie in the Planet of the Apes series would be so riveting?