Tony Stark (Downey Jr.) should really start keeping tabs on all of the people he may have crossed or ignored in the past. Then again, that list may get way too long. His previous foes, including Obadiah Stane and Ivan Vanko, were previously connected to Tony and his father. Back in 1999, Tony met Aldrich Killian (Pearce) at a New Year’s Eve party but brushed him off and neglected to join him in his business venture, Advanced Idea Mechanics, A.I.M for short. Killian is a scraggly, disabled, and worn down man working with the Extremis virus which gives strength and regenerative treatments to humans.

In present day, Tony is out of sorts often suffering from panic attacks and a lack of sleep due to the alien invasion in New York (see Marvel’s The Avengers for this story). His girlfriend Pepper Potts (Paltrow) who is now the CEO of Stark Industries is worried about him and is growing tired of the consequences of him being Iron Man. To make things even worse, a terrorist by the name of The Mandarin (Kingsley) is sending threatening videos of the destruction he intends to inflect on the United States. It is probably no coincidence that he bears a resemblance to Osama bin Laden. An attack outside Grauman’s Chinese Theatre leaves Tony’s bodyguard Happy (Favreau) badly injured and hospital bound. Tony sends a pretty ballsy message to The Mandarin saying he is not afraid and goes so far as to give his address out over live TV threatening that he is ready for whatever The Mandarin has to offer. The Mandarin sends his team to Tony’s gorgeous Malibu residence and destroys the place. With the help of a ten-year old boy and his friend James Rhodes (Cheadle), who is also suiting up in his own gear as Iron Patriot, Tony sets out to destroy The Mandarin and find out the connection between him and Aldrich Killian.

Black takes over the director’s chair from Jon Favreau who helmed the first two. The series needed a boost of fresh air after Iron Man 2. Fans left quite disappointed as the second film was weak and quite boring compared to the energy of the first one. Downey and Black previously worked together in the noir hit Kiss Kiss Bang Bang so it was reassuring to hear that collaboration would be back as Downey would be particular about who would sign on board for the third entry. Black wrote the film with Drew Pearce and they definitely know how to play to the strengths of these characters and actors. Each actor has great moments to shine without ever feeling like they are wimpy supporting characters in Downey’s movie. There are a few clever little twists thrown in to up the ante for the series and what is to come in the Marvel universe. The film also boasts the addition of the best villain in the series. Ben Kingsley is no stranger to playing the bad guy, but his take on The Mandarin is diabolical, sadistic, and dare I say funny at times. Each of the action sequences and special effects are top notch and impressive. The Iron Man suit alone comes flying onto Tony in various parts that connect all together once they hit his body.

These movies would be nothing without Robert Downey, Jr. I cannot think of another actor that would have taken on this role and given him the dimension he has been able to use with playing Stark. He can play the cocky comedic one-liners in one moment, kick serious ass in the next, and then have touching dramatic scenes with Pepper in an another scene. I would not be as big of a fan of the Iron Man character if it was not for Downey. If this was the last stand-alone Iron Man film, it would end on a high-note. I hope Downey comes back for The Avengers 2, but that will most likely be the last time he dons the Iron Man suit. 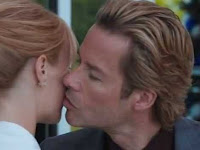 It should probably go without saying that you should keep an eye out for the Stan Lee cameo and stay after the credits for the additional fun scene that is always tagged onto Marvel movies. Don’t worry. No spoilers from me on what it entitles! Just trust that it is well worth sitting through the names of hundreds upon hundreds of people involved with the digital effects of the film.