Movie Review: LIFE OF THE PARTY 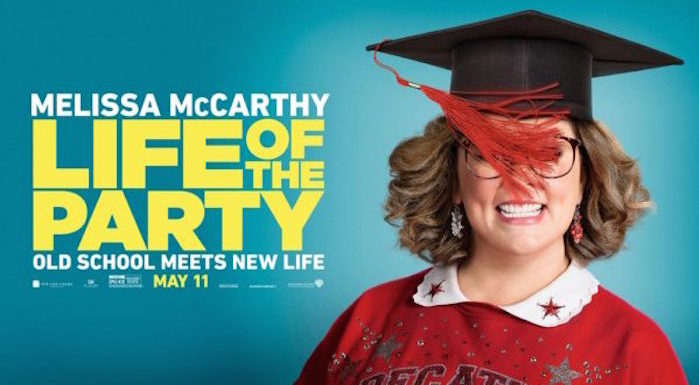 Melissa McCarthy and her husband Ben Falcone frequently collaborate on a variety of projects. They’ll write the script together while he directs it and she stars as the lead. Life of the Party is their third movie together following 2014’s Tammy and 2016’s The Boss. I’d rank this film as the best of the three. In it McCarthy plays Deanna who is heartbroken after waiving goodbye to her daughter, Maddie (Gordon), who’s entering her freshman year of college. She and her husband (Walsh) will now be empty nesters, except he pulls a fast one on her as they drive off campus. He announces in the car that he wants a divorce as he’s fallen in love with their realtor (Bowen). Deanna is now blindsided and at a loss of what she wants out of life without her daughter or husband around. After perusing old photo albums, she makes the bold decision to go back to school to finish her archeology degree. She picks her old alma mater that just happens to be the same school that Maddie goes to leading to some awkward mother/daughter moments. Deanna has that cheerful school spirit unlike her daughter and new dorm mate, played with hilarity by Saturday Night Live’s Heidi Gardner. Maddie reluctantly comes to terms with the idea that her mom is attending the same parties and classes. She and her girlfriends give Deanna a much-needed makeover to fit in and start this new chapter of her life.

The trailers for Life of the Party feel somewhat misleading as it relies heavily on showcasing the frumpy and foul-mouthed side of McCarthy, which is what fans have gotten used to especially coming from movies like Tammy or Bridesmaids. To me, what works best about this film and McCarthy’s performance is that she dips into that a tad, but quickly turns Deanna around and shies away from being a rehash of what we’ve seen from the actress previously. Before the mother/daughter story line develops, we get a quick glimpse into Deanna’s personal life with best friend Christine, played by Maya Rudolph. The two actresses frequently work together so their off-screen chemistry easily transfers onscreen, and it’s a delight to see them play off each other when neither of them has to rely on caricature acting like we’ve seen on SNL. Their scenes have a heartfelt approach from one friend to another in a trying time, but also come with their fair share of humor. Their scenes together had me laughing so hard I missed half the dialogue.

When Deanna is officially back on campus, there are plenty of endearing mother and daughter scenes with Molly Gordon (Animal Kingdom). They both have the opportunity to rebuild their relationship as they need to rely on and learn from each other as they work their way through starting college and dealing with divorce. It’s a sweet mother/daughter movie coming to theaters in time for Mother’s Day. Falcone and McCarthy make the wise decision with their script to steer away from making Deanna the nagging mother or the mom that would destroy her child’s chances at college. There are a variety of ways this movie could have veered in the wrong direction, and for the most part Falcone and McCarthy keep the core relationship on track, as it’s the heart and soul of the movie.

It got me wondering what it would be like if my mother, stepmother, or mother-in-law were back on campus going to sorority parties. All three would have very different results. I can see all three of them in McCarthy’s performance which attests to McCarthy’s ability to make Deanna a relatable mother. As Deanna spends more time with her daughter and the sorority girls, we see how she fairs with campus life and its fair share of off-kilter moments. It has that sorority/fraternity movie vibe like Neighbors but without the raunchy, gross-out humor. One of the minor subplots contains a Mrs. Robinson-style relationship between Deanna and the significantly younger Jake, played by the hunky Luke Benward. I can go either way on this storyline. The age difference doesn’t bother me, but it doesn’t feel all that necessary to begin with in order to drive the plot. On the other hand, it leads to the film’s biggest and funniest scenes that I did not see coming and would hate to ruin here.

Melissa McCarthy and her young co-stars all work well together each representing a different approach to the college lifestyle. There are a few extraneous characters throughout the movie including a few sorority girls and some minor adult characters. Matt Walsh and Julie Bowen don’t fare as well either. Both actors are currently starring in two of the most respected sitcoms on television with Bowen’s work on Modern Family and Walsh in Veep. They’re a bit underutilized in this film despite the power and cringe worthy comedy they can typically deliver.

Life of the Party isn’t breaking any new comedic ground, but it reminds us why we love watching McCarthy on screen. I’ve seen the film twice now, and it still had me audibly laughing quite hard upon second viewing, which is a testament to how well some of McCarthy’s bits work. It’s a light-hearted mother/daughter story without dysfunction and angst driving the characters.

Is It Worth Your Trip to the Movies? Life of the Party should be another big hit for McCarthy.

Check out my interviews with Melissa McCarthy, Julie Bowen, Matt Walsh and the rest of the cast HERE.