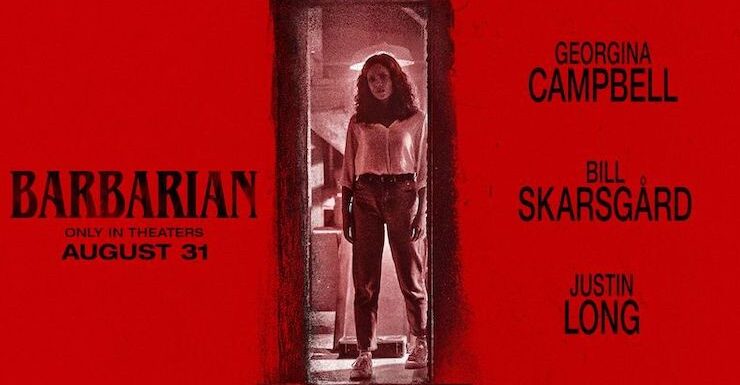 BARBARIAN Writer/Director: Zach CreggerStarring: Georgina Campbell, Bill Skarsgård, Justin Long The new horror film Barbarian is one of those that’s best to experience with absolutely no knowledge going in. So you may just want to come back to this review AFTER seeing the movie. The title “Barbarian“ is left pretty vague on purpose almost begging you to learn more about what it means in context to the movie. I’ll start by seeing we meet Georgina Campbell’s character Tess arriving at an Airbnb late one rainy night. It’s cold, dark, and the key is missing from the front lock. Come to find out it’s already taken END_OF_DOCUMENT_TOKEN_TO_BE_REPLACED

JAY & SILENT BOB REBOOT Director: Kevin SmithStarring: Jason Mewes, Kevin Smith, Justin Long, Craig Robinson, Ben Affleck, Jason Lee In my opinion the phrase “fan service” is on over-used critique we’ve come to hear far too often for Marvel or Star Wars films. It usually comes with a negative connotation, but I think this phrase aptly applies and is a good thing for Jay and Silent Bob Reboot. Jason Mewes and Kevin Smith are back as our titular characters whom we first met 25 years ago in Smith’s black and white film Clerks. Jay and Silent Bob find out that the comic book characters END_OF_DOCUMENT_TOKEN_TO_BE_REPLACED